Leading media organisations last night attacked a local council for implementing a “draconian” ban on journalists and photographers at the Oldham East and Saddleworth by-election count.

Town Hall officials ruled that the press and media would only be able to watch the count from a balcony at the venue – and that and any access to candidates had to be done through a council press officer.

Reporters are normally allowed on the floor of election counts to speak to candidates while reporting on the action first-hand.

The Press Association and the BBC both made complaints about the running of the event to the acting returning officer, Oldham council chief executive Charlie Parker.

In an email sent to journalists yesterday, the council said it would have a team of press officers and staff available to “assist” them, adding: “If you wish to speak to a candidate/agent who is located on the count floor then you should ask them to facilitate this for you.”

Under election laws, the returning officer can permit press on to the count floor, as is customary, as long as it does not impede the counting of votes.

Mike Dodd, legal editor at the Press Association, said the ban was contrary to the right of freedom of expression guaranteed by Article 10 of the European Convention on Human Rights because it was unnecessary and disproportionate, and placed restrictions on the media’s ability to do its job properly.

The BBC’s litigation department told Mr Parker such “draconian action” was not taken by any other returning officers at the general election and his rules are “neither a necessary nor a proportionate” response to ensure the count was done efficiently.

In a statement issued prior to the count Mr Parker said he was allowing media representatives “significant capacity to observe and undertake their important work from the balcony of the Queen Elizabeth Hall which directly overlooks the count floor and which affords clear and uninterrupted views of the stage where the declaration takes place.”

“Candidates and agents will be able to speak to the media freely in the areas away from the count hall which do not impact on the work of the count team,” he added.

Despite the difficulties, a six-person team from the Oldham Chronicle worked through the night to produce a special 5am edition with the result.

And with the Labour team celebrating its win in the Royal Oak pub next door to the Chronicle’s offices, photographer Darren Robinson was able to surprise new MP Debbie Abrahams by handing her the first proof of the front page.

Editor David Whaley said: This has been an unprecedented by-election for Oldham with massive national and international interest all the way through the campaign since the court case ousted Phil Woolas.

“We have had visits from all major party leaders and have covered everything that moves. It would have been disappointing not to be out there early with the result so we went for it and have been delighted by what was achieved.” 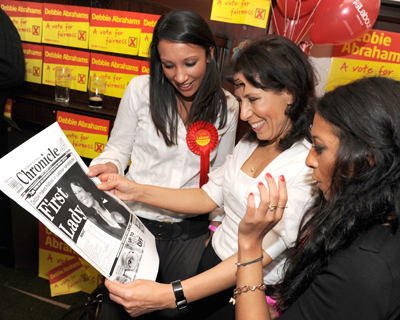