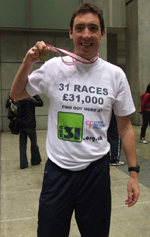 A regional daily journalist with cystic fibrosis has raised more than £9,000 for a charity which funds research into the condition after completing 31 races in 2010.

Alan Williams, who is an assistant news editor at the Western Daily Press, decided to take on the Run31 challenge to support the Cystic Fibrosis Trust after he turned 31 – which is the average life expectancy for someone with CF.

During the year, he has run for more than 52 hours comprising five marathons including the London and Tokyo ones, a three-hour orienteering race, 13 half marathons, five 10-milers and ten other races – making 34 in total as he counted those of 10k or less as just half a run.

Alan set himself the target of raising £31,000 with the support of businesses across the region, although he soon realised it would be difficult to achieve this because of the impact of the recession, but he has still raised an impressive £9,287.31.

He has blogged about the races throughout the year and has posted his final piece after completing his challenge last month, saying he plans to keep on running.

Alan wrote: “It’s truly safe to say there were no easy races this year and if there had been, they wouldn’t really have deserved a place in Run31. Even a four-miler in July had me in pain as I was forced to walk the second half due to tightness in my calves.

“But the challenge has given me memories I will carry with me for the rest of my life and enabled me to meet people who will hopefully become lifelong friends.

“And my running days are not done either. Aside from a recent chest infection, this has been the healthiest year of my life, so much so that my consultant only wants to see me every six months from now on, rather than every three.

“In 2011, I will be carrying on and aiming to hit new heights. I think I have already proved that having a serious medical condition doesn’t mean you have to batten down the hatches, but I want to keep doing it for as long as my body allows and there is no reason why that can’t be for another 40 years or more.”

He added he wanted to thank everyone who had sponsored and supported him during the year.