Imagine the scene: you’re the duty reporter making a round of calls in one of the UK’s quietest news patches on a Sunday afternoon.

Without being too macabre, you desperately want to hear of a crash, a shop fire or a brawl, anything to break the monotony of inputting submitted copy for the Clubs & Associations page.

Suddenly – just as the police control room is strangely too busy to answer – the newsroom’s phones and your mobile all start ringing at once.

Brutal information is coming in from all angles: hysterical locals screaming about a massacre; usually calm contacts breathlessly describing fleets of ambulances flying past;  and then the news editor himself ordering the whole office (just you at the moment) to go to three different places at the same time.

I’ve made all that up, of course, but I’m sure it’s not too much of an exaggeration of what took place at the Jersey Evening Post office on Sunday 14 August, the afternoon when Damian Rzeszowski allegedly stabbed his wife, two children, father-in-law, family friend and another child to death.

And like any news team, the Post instantly reacted, reporters and photographers flocking in on days off and then early again the next morning to prepare for the biggest murder story in the paper’s history.

The front page on the evening of Monday 15 August was wiped clear of the usual advert and boosts, instead dominated by ‘Murder of the innocents’ atop a picture showing dazed neighbours and police officers. 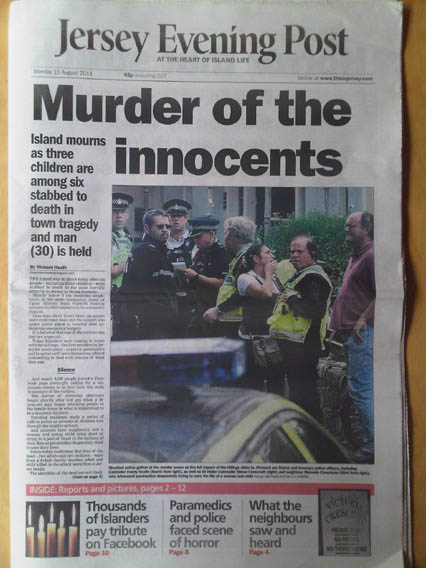 I thought the headline itself was spot on, describing a chilling local event that had been worldwide breaking news from the previous evening.

Some might criticise the way ‘innocents’ was tabbed to the right, but I thought it a touch of design brilliance to make room for a nine-deck sub-heading that calmly summarised the story in 19 words and took your eye into the anguished picture.

‘Island mourns as three children are among six stabbed to death in town tragedy and man (30) is held’ gripped the imagination, leaving readers in no doubt that they should sit down and read the rest of this story.

In all on day one, there were 12 pages devoted to the island’s first murders for seven years, containing a total of 23 reports and 18 live pictures.

The paper’s 11.15am on-day deadline meant that these were the latest factual reports and responses from locals, not just a few cobbled together late night quotes.

‘Horror that struck a peaceful street’ was emblazoned across pages two and three, with a sub-heading ‘Police officers are left shaken by the sight of dead and dying people around murder scene’.

Other inside headlines included: ‘Ministers: we are all deeply shocked and saddened’, ‘The child screamed as he was chased by a man’, ‘I can’t stop thinking about what I saw. I want to cry’ and ‘An Island in grief and shock’ for the leader.

A source at the Jersey paper tells me that 21,400+ copies were sold on that Monday – a figure more than 18pc higher than the 18,088 average sale recorded in the latest ABCs.

Day two again reportedly sold more than 21,400 copies, ‘The young lives destroyed’ splash on Tuesday 16 August introducing the details and images of those who died with 29 reports and 25 pictures on 12 pages of coverage.

And day three was said to have sold a touch under 20,000, still 10pc up on the average, with the ‘Troubled lives behind a family tragedy’ splash, 19 reports and 17 pictures sustaining what must have been Islanders’ fascination and grief. 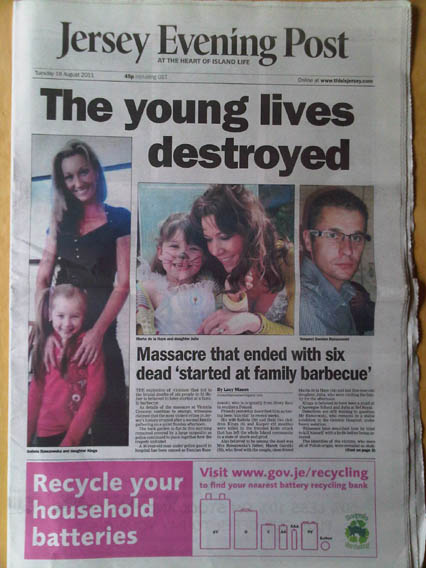 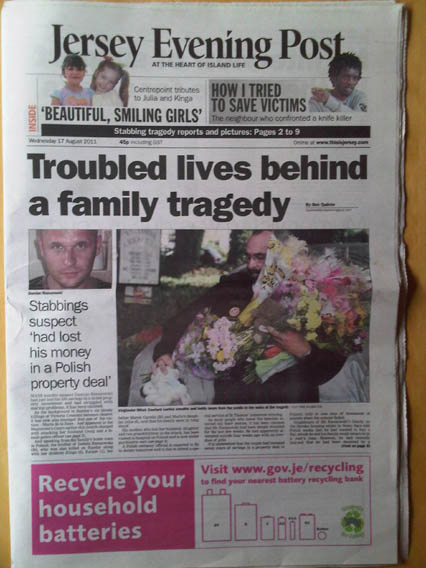 What I liked about the above front pages is that the Post got it right on three consecutive days.

‘Easy’, some might say, ‘anyone could fill their boots with that size of story’. Not necessarily so – carrying the same story for three days is not as simple as it looks, needing substantially different headlines, angles and images to hold readers’ interest.

A balance is also needed throughout the inside pages, blending facts, eye-witness reports, emotion and officialdom, which takes planning, strong decision-making and decent headline writing.

Get it right, and you’ll not only boost sales in the short-term but can hold on to a proportion as former and new readers get a sample of your quality.

Get it wrong, and the immediate sales rise can be followed by a slump as readers past and present get cheesed off with bloodthirsty coverage.

So top marks to editor Chris Bright and his team for producing the three editions I saw with a controlled verve that equalled anything I’ve seen in recent months.

There were several other parts of the Post I liked the look of, such as ‘Family Notices’ on the inside back page every day – a placement that leaves readers knowing exactly where they are.

Another regular spot was for popular courts reports above the ‘Noticeboard’ section and next to ‘Puzzles’, straight after the TV spread. On 15 August, this third of a page section contained 16 separate cases from Magistrate’s and Youth Courts.

And whether by choice or printing press restrictions, the fact that around 30 pages were in mono every day gave the Post a traditional feel that many modern-day papers lose in frenzies of overblown colour.

Pictures, though, were used too big for my liking throughout the Post – often taking up more than half of the available page, inevitably hitting story counts.

Another gripe was that after a newsy start, each edition lost its way from the leader page onwards, stumbling through a seemingly unplanned and certainly unmatched mixture of comment, features, back to news, more features, then more news, and so on.

And does the Post use too much wire? Each of the editions I saw had a minimum of three packed pages of ‘World News’ and ‘International Business’, which in regular 48-page books felt a lot.

I fully understand that a large number of Jersey’s 88,000 population is from Britain, with significant sections of Portuguese, Irish, French, Polish and Russian, but that doesn’t mean they turn to the Post for overseas news.

The ‘At the heart of Island life’ strap line means the Post should offer in-depth coverage of what various ex-pat communities are up to on Jersey, not too much wire copy that might occasionally, scantily and blandly tell stories from their homelands. Yes – give them UK and World digests, but not three pages.

The Post, with a cover price of 45p, is part of the Guiton Group along with its sister Channel Islands paper, the Guernsey Press and Star.

Guiton was a family-owned company dating back to 1890, but was taken over by the Wolverhampton-based Claverley Group in 2004, an unusual but healthy Channel Island expansion.

This means that two of the UK’s smallest regional dailies are now sisters to the largest selling Wolverhampton Express and Star, and that along with the Shropshire Star paper they are owned by a group that is currently determined to keep all four as on-day, live evening titles.

This certainly worked during the stabbing tragedy, keeping Islanders more up to date in print than anywhere else in the world.