Dyson at Large: How Stoke won the FA Cup

Maybe it was just the sheer impact of red on page one, or the stronger splash headline, or the 24-page as opposed to the 12-page pull-out.

Possibly it was the fact that 200+ pictures embarrassed 27, or that 57 reports belittled 19, or that 45 pages completely outweighed 15 in total pagination devoted to the final.

Or perhaps it was just the outright victory in all of the above that meant the Stoke Sentinel easily thrashed the Manchester Evening News 6-0 on Monday 16 May to take the FA Cup of newspapers back to the Potteries. 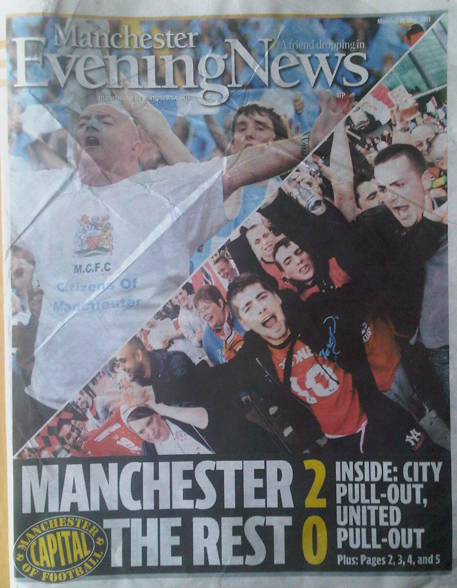 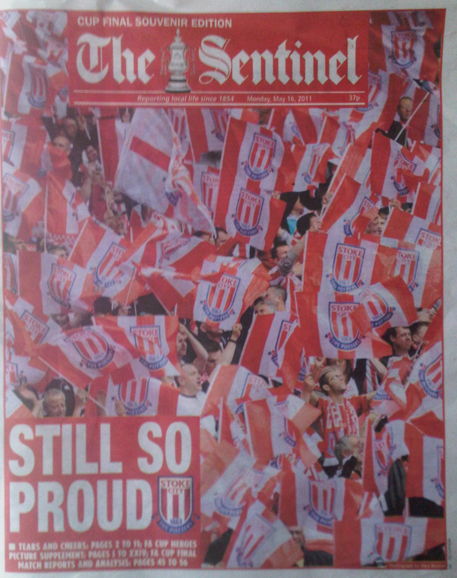 “And,” my mind’s eye continues, “we had another 40,000 people who’d taken part in the Great Manchester Run 2011 that we also had to reflect in the paper with another eight-page section!”

I see their point, I really do, and we all sympathise with Manchester having to host two top football teams as well as other world class sports events that come as part of being Britain’s third city.

But Dyson at Large, as ever, is the referee in such clashes, and like it or not the Sentinel just seemed to want the inky trophy more than the MEN.

‘STILL SO PROUD’ was the restrained but appropriate splash headline for Sentinel readers, allowing the enthralled, resilient and proudly flag-waving fans to dominate the paper that many would have bought two of for posterity.

Compare this with the ‘MANCHESTER 2 THE REST 0′ headline in the MEN that might have worked for councillors’ civic pride but would have disappointed both United and City fans in terms of souvenir value.

The MEN was similarly trounced in the back page headline shoot-out, a confusing ‘IT’S NOT OVER YET!’ – referring to the Champions League Final they lost to Barcelona on Saturday anyway – simply failing to inspire like the Sentinel’s ‘HEARTBREAK.’ 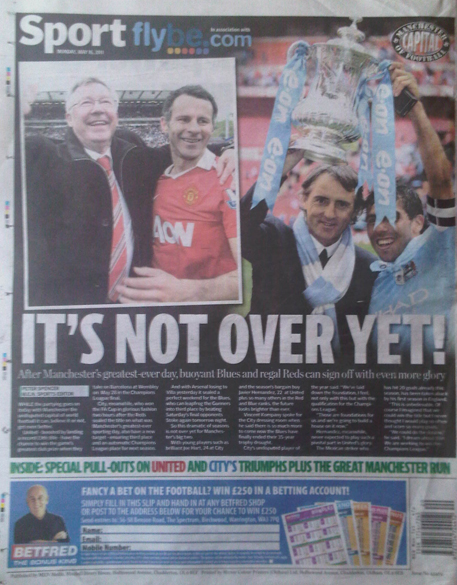 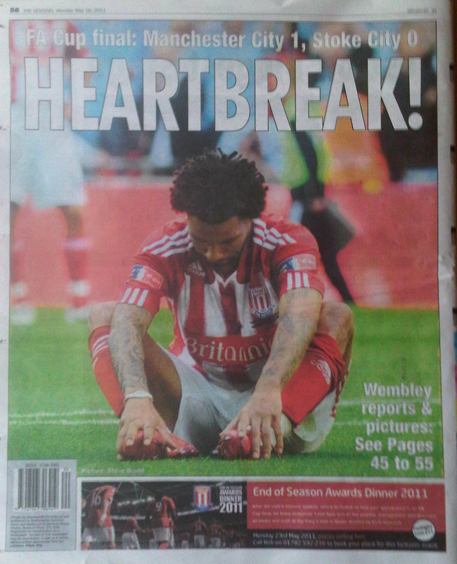 The fact that the MEN drowned its back page copy in a harsh WOB hardly helped either, whereas the Sentinel’s wipe-out picture of a dejected Jermaine Pennant didn’t even need a caption.

Even simple tools like interactive content saw the Sentinel run away with the trophy, a total of 50 vox pops with fans versus none in the MEN.

“Ah, but it’s only what you’d expect,” the MEN staff in my head point out. “We’re used to winning whereas Stoke are lucky to have gotten to the final.”

Yes, you’re right, and for me that’s why the Sentinel’s pages stood out, and I’d wager a tenner the Stoke paper had a higher percentage increase in circulation on Monday 16 May than Manchester’s.

Indeed, if the relevant circulation managers would email me their answers and I’m wrong, I’ll happily donate to the next Big Issue seller I bump into.

Sport aside, it’s worth noting that the MEN’s news stories competed well: ‘Drunken girl slashed her brother’s face with a bottle’ on page 13 and ‘I felt a blinding pain and knew I’d lost my arm’ on page 17 both grabbed my attention.

As a sample comparison, the same pages in the Sentinel were either a little parochial with ‘Fire crew’s no-go for false alarms’ or just not as evocative with ‘I have a timebomb ticking in my brain’.

The MEN has a rich heritage, and remains a strong paper in the hands of editor Maria McGeoghan.

But on the one-off subject of this year’s FA Cup final coverage, Mike Sassi’s Sentinel walked off with the silverware.

Even the price and total paginations confirmed this result: the MEN cost 47p for 72 pages; the Sentinel cost 37p for 80 pages.

Given that I’ve imagined the MEN staff’s response, I think I’ll also allow myself to make up what Sentinel newsroom might have said when the full-time whistle blew on the competing editions.

“Manchester fans thought it was all over. It is now!”