Dyson at Large: Bored by bombs in the city

Imagine how a regional daily newspaper in England, Scotland or Wales might typically respond to a major security alert.

And I’m not talking about a groundless bomb scare prank or an overly nervous reaction by a train station manager to a forgotten shopping bag.

I mean a truly life-threatening situation that includes:

Does that sound like a splash and pages two and three spread minimum to you? Yeah, me too.

In fact, I think this blog applauded that very reaction to a real bomb scare in the Worcester News about a year ago.

But what would make screaming page one headlines on the mainland barely made it onto the front of Belfast’s three regional dailies on 26 January.

‘Homes evacuated in security alert’ was the calm headline on a tiny page one brief in the Belfast Telegraph’s am edition, turning to a detailed but hidden lead on page 10.

‘Families flee homes in bomb scare’ was the slightly more enticing headline for a measly six-par stick on page one of the News Letter, with no more details to be found anywhere inside the paper.

And as for The Irish News, there was nothing on pages one, two, three, four, five, six or seven – just a down-page, second lead on page eight headlined ‘100 homes evacuated over landmine claim’.

I would not like to think this inside left-hand page burial of dissident Republican crimes had anything to do with the fact The Irish News is a proudly Nationalist title.

But the seventh par of its copy left me incredulous: “Sinn Fein North Belfast assembly member Gerry Kelly said those responsible had caused major disruption. He criticised them for not saying specifically where they had left the mine.”

Oh, placing the bomb is not so much of an issue then, as long as the bombers are a little more helpful about exactly where it is!

Thinking through the placement decisions of all three titles, the reasoning may well be that Belfast is somewhat anaesthetised to terrorist incidents, and so evacuations caused by landmines is not as newsworthy as it would be on the mainland.

Bombs aside, assessing three dailies in one review is a bit of a challenge, but given I’m not in Belfast very often I’m going to at least compare and contrast their page ones.

Left trailing in content and design for me was the News Letter, with what I thought was an unfriendly feel, a deep green boost background and the subject matters perhaps to blame. 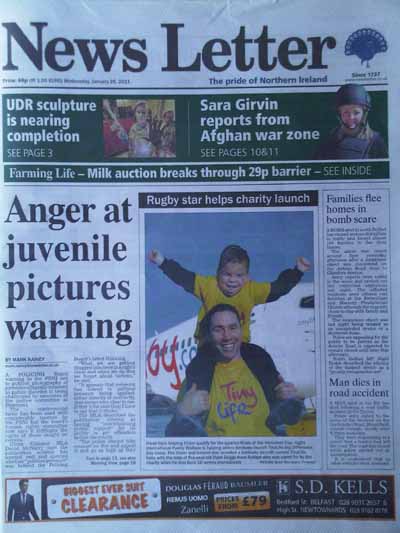 ‘UDR sculpture is nearing completion’ left no-one in doubt of the paper’s Unionist leanings, a thread continued throughout the paper, even including a bizarrely Royalist ‘News picture of the day’ displaying Prince Charles and Camilla meeting Union Jack-waving crowds in Leicestershire on page 19.

The other page one boost was for a despatch from a News Letter reporter visiting British troops in Afghanistan, and the third an odd, texty one that did little for me: ‘Farming Life – Milk auction breaks through 29p barrier’.

The News Letter plumped for a too slim splash headlined ‘Anger at juvenile pictures warning’, not a bad story, but one which had been around and about as general news everywhere on the evening of 25 January as the paper was put to bed.

The charity launch picture alongside it, while introducing smiles, was of little news value.

The 3cm strap ad provided space for a full column drop, but we’ve already mentioned what took up most of this (the bomb scare that could have been the splash), with a tail-end ‘Man dies in road accident’ completing what I felt was a lacklustre front.

The Telegraph was my clear winner for page one design with its striking masthead, prominent boost to a £6.95 eating out scheme and clean overall layout. 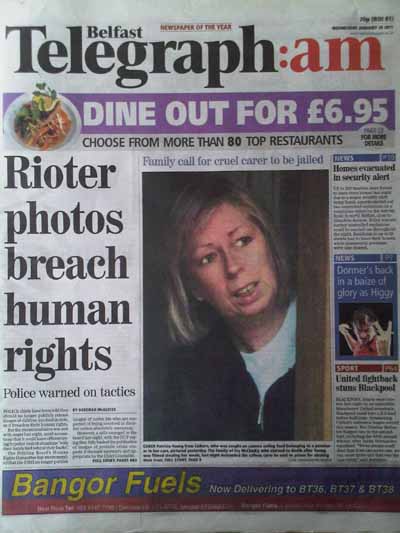 The splash itself was the same as the News Letter’s, a story available to everyone the night before, a tad dull for a page one ‘grabber’ and again too slim a shape for my liking.

‘Rioter photos breach human rights’ was the headline, a four-par write-off pointing you to a page four-five spread on the detailed background, analysis and ‘yes’ or ‘no’ debate on the issue.

This did make a good, in-depth read on the inside spread, but much better as a splash would have been the story that took up the majority of page one as a picture write-off, with a too-small headline ‘Family call for cruel carer to be jailed’.

This was a report on a woman who had been caught on camera eating the food belonging to an elderly pensioner in her care who later starved to death.

A huge human interest story and, although it had emanated from court, the Telegraph confronted the carer at home with the resulting snatch picture and refusal to apologise creating an angle that could have made a dramatic full splash headline.

A column of briefs completed page one: the first on the aforementioned bomb; the second a page seven boost with a too-obscure headline for my liking, ‘Dormer’s back in a baize of glory as Higgy’ (answers in comment postings please); and the third highlighting that the Premier League is obviously of interest, ‘United fightback stuns Blackpool’.

Which brings us to The Irish News that I felt won the prize for best page one story – despite my earlier slating for its burial of the bomb scare. 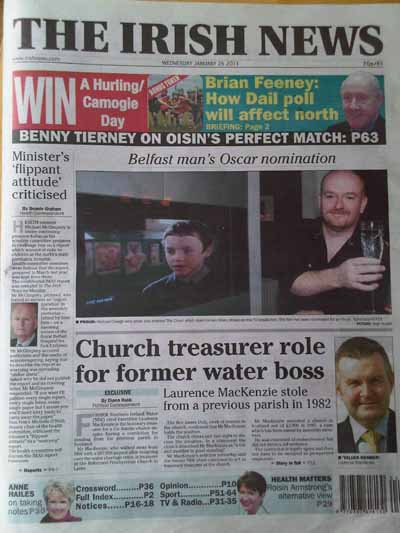 Forget the messy page one design for a moment, ignore the jolting boosts, excuse the dark main picture story, even forgive the poor splash headline that failed to tell the story, ‘Church treasurer role for former water boss’.

But relax into the stark sub-heading, ‘Laurence MacKenzie stole from a previous parish in 1982′, and enjoy the exclusive investigation that exposed the top executive’s dishonest past.

The intro was sharp too – neatly summarising the story but pulling you in for more: “Former Northern Ireland Water chief executive Laurence MacKenzie is the honorary treasurer for a Co Antrim church despite having a conviction for stealing from his previous parish in Scotland.”

The seven-par splash and the full 24-par story inside presented a skilled expose with full quotes from all, rightly outraging churchgoers who were already furious at MacKenzie’s £97,000 pay-off after being ousted over the water shortage crisis.

And I am sure that The Irish News would have been just as damning if the erring MacKenzie has been a Catholic rather than the Presbyterian he was.

Page one design and content judged, how did the three titles compare on value for money?

The lowest story count went to The Irish News, published by Northern Media Group for 70p, which had a main book of 64 pages, with an extra eight page sports pull-out: it contained 77 reports on 28 news and features pages, and 72 reads on 22 pages of sport.

Second was the News Letter, published by Johnston Press for 68p, which had a main book of 48 pages, with an extra 24-page Farming Life pull-out: it contained 130 reports on 43 news and features pages, and 54 reads on 16 pages of sport.

The best value was in the Telegraph, published by Independent News and Media for 70p, which had a main book of 64 pages, with a 36-page, stapled commercial holiday guide dropping out: it contained 136 reports on 34 news and features pages, and 51 stories on 14 pages of sport.

Despite my critiques, it was pleasurable finding three serious daily newspapers in Belfast, and interesting to note that between them they sell an average of 126,382 a day: the Telegraph 58,491, the Irish News 44,222 and the News Letter 23,669.

These latest figures, published last week, prompted quite a debate among Irish media-watchers.

Oh for the days when the likes of London, Birmingham and Manchester each boasted three regional dailies.