An IT expert turned journalism student hopes she has taken a step towards achieving her dream reporting job after a story she wrote on work experience made the national headlines.

Kate Bamber wrote a story for the Chorley and Leyland Guardian about a mum-of-four, Kellie-Ann Cottam, who receives annual benefits of £37,000 and would need a job paying £60,000 not to be worse off.

And the splash was picked up by the Daily Express, Daily Star, BBC, ITV’s Daybreak and other newspapers and magazines.

Kate, 32, has worked in IT for 10 years but decided she wanted to become a journalist and since February she has been spending one day a week at the title while studying part-time at News Associates in Manchester. 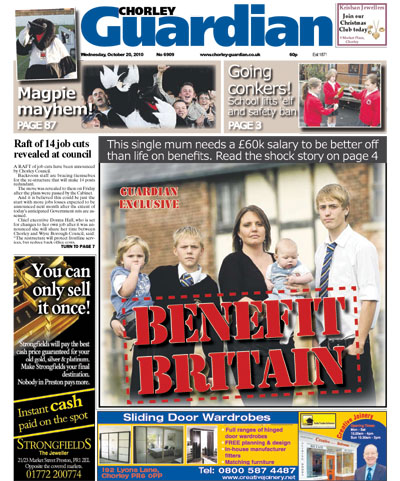 She said: “Wow! It was great story to do because Kellie-Ann isn’t your typical ‘single mum on benefits’.

“She admits the system needs changing and she’s made it her mission to try and help people out of the benefits system.

“I knew it was a good story but to see it picked up by the national press convinces me that I’ve made the right decision to try and become a reporter.”

Kate, who has brought in a string of exclusives for the Chorley and Leyland Guardian, has won the praise of editor Chris Maguire.

He said: “I spoke to Kellie-Ann at a business conference that I was talking at but it was Kate who sprinkled the magic dust over it and made a fantastic story.

“She’s become a big part of our team and I’m sure she’ll land the job her talent deserves.”