A weekly newspaper has joined forces with an army captain to launch a pen appeal for children in war-torn Afghanistan.

The Brechin Advertiser is calling on its readers to donate biros and felt-tipped pens for its appeal, which will run into the early part of the New Year.

Brechin-based Territorial Army Captain Lisa Irwin came up with the idea after seeing first hand the difference something as simple as a pen can make to youngsters in Afghanistan.

Staff at the paper, known as the ‘Brechiner’, say the response to its appeal has already been very encouraging, with many pens being dropped off at its offices and local schools getting involved. 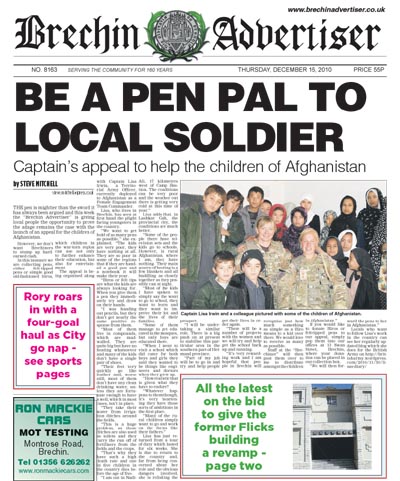 Capt Irwin said: “The pens we collect through the support of the Brechiner and the local secondary and primary schools who have all joined the campaign, will not only enable us to put a smile on the faces of youngsters who have nothing, they will actually make life so much easier for some of the service personnel serving in the country.

“The more we can provide for the people, the more they see we are here to try and improve their lives. There is real hardship, particularly in a number of the rural areas.

“Hopefully, this campaign will go a small part of the way to improving the lot of many Afghani children.”

She has just returned from a six-week tour of duty and is due to return, so the pens will be posted out to Afghanistan for her to distribute to children to use towards their education and for entertainment.