A weekly newspaper has published a 56-page supplement to mark the anniversary of last year’s West Cumbria floods and the area’s subsequent recovery from the devastation.

The Workington-based Times and Star covers the main flood-hit towns of Cockermouth, Workington and Keswick.

The supplement, entitled West Cumbria’s Story, carries the best of the articles and pictures published by the newspaper, starting with the first dramatic headlines of November 20, 2009.

Priced £1, it includes a foreword by Gordon Brown, who visited the area as Prime Minister on the weekend after the floods. 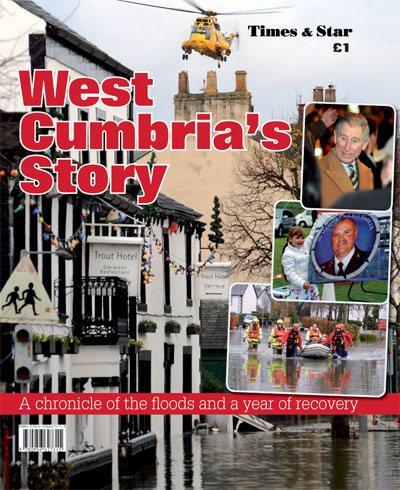 The supplement is the first time that all the information published about the event has been gathered in one place as a permanent record.

Editor Steve Johnston said: “This chronicle is based on the stories of those who were most affected; those left homeless and those who rallied to the fight.

“The Times and Star was at the heart of the community throughout, capturing in words and images all the emotion, drama, anger and spirit that has made this last 12 months so unforgettable.”