Weekly launches bid to save RAF base from closure

A weekly newspaper has launched a campaign to save an RAF base under threat of closure as part of the government’s defence cuts.

The Northern Scot has started its ‘People’s Campaign’ in a bid to prevent ministers shutting RAF Lossiemouth, which is home to Tornado aircraft.

It comes after ministers decided to scrap the Nimrod MRA4 replacement programme, which is also set to cause the closure of the neighbouring Kinloss base.

The paper has started a petition and had banners, posters and t-shirts made for its campaign, while it also played a key role in mobilising local people for a march at the weekend, which was attended by 7,000 protestors. 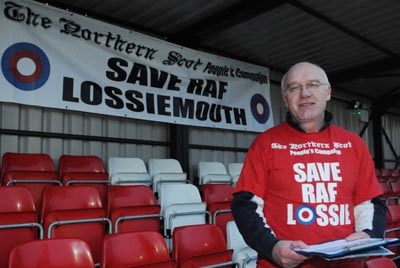 Editor Mike Collins has written to Prime Minister David Cameron inviting him to visit Moray to see the effect axing the Kinross base will have and hear local people’s fears over a second closure.

He said: “The two bases have over 5,700 service and civilian personnel and the local enterprise company has reported that they pump £160m into the local economy each year.

“The stakes are high for the future of the Moray area and we are fulfilling our role as the local newspaper in championing the cause and giving a voice to the anger and concerns of local people.

“The response to what we have done has been remarkable. Letters have been pouring into the newspaper, readers have been snapping up petition forms and posters as quickly as we can print them, and we helped to mobilise an astonishing turnout for the march and rally.

“This is the biggest story to hit the area for years and our newspaper is campaigning hard for Moray to be heard by the Ministry of Defence, the coalition government, and politicians of all parties on both sides of the border.”

Campaigners fears all Tornados will be switched to RAF Marham in Norfolk, but the Ministry of Defence says no decisions have yet been made.

Scotland’s First Minister Alex Salmond attended the march, voicing his support for the campaign, and other political leaders were also present.

Deputy editor Chris Saunderson has been co-ordinating the coverage on the bases and also sits on an action group set up for the Save RAF Lossiemouth campaign, which is made up of businesses, industry leaders and local authority representatives.

The paper has splashed stories on its front pages for the last three weeks and is planning a four-page photo spread of the rally.