A ‘hands-on’ local newspaper editor who still climbs on top of his printing press to fix it has celebrated his 90th birthday.

Charles Curry, who is believed to be Britain’s oldest newspaper editor, has spent an amazing 74 years working for the New Milton Advertiser and Lymington Times in Hampshire and is still going strong.

He joined the weekly title when he was 16-years-old as a reporter after leaving school with no qualifications and took over from his father, also called Charles, as the owner-editor in 1966.

Charles celebrated his 90th birthday with a surprise flight across the area arranged by his family and also had a special presentation from staff at the paper to mark the occasion. 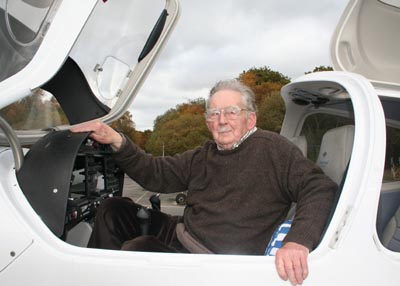 Senior reporter Keith Bloodworth, 67, who first started working for the paper in 1960, said: “His father was a tyrant and we were all fearful of him, make one mistake and he would be on your back.

“Charles has been a very good boss and he has probably been too nice. He is totally the opposite to his father.

“He is very laid-back and relaxed although if the occasion arose, he would show that he was the boss.

“I have a lot of respect for him. He is unique and a one-off.

“He can adapt his hand to anything and is very mechanically-minded. He is very much a hands-on person. He can still be seen climbing on top of the press and tightening the wheels.”

Charles was made an MBE in 1997 by the Queen at Buckingham Palace for services to journalism.

And he told HTFP: “Somebody obviously thought I was worth it. I did try to get out of it but the family insisted I go to the Palace. I found the Queen very charming – I am glad I went.

The broadsheet paper, which sells around 21,000 copies each week, was believed to be the last one in the country to stop using hot metal printing in 2001.