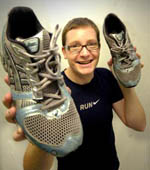 A weekly newspaper journalist will finally take on the challenge of the London Marathon next year – six years after first applying for a place.

Reporter Patrick O’Kane, left, from the Kendal-based Westmorland Gazette, will take on the 26-mile run next April for the National Society for Epilepsy.

He first applied for a place through the general ballot in 2004 and has done so every year since.

But after being once again rejected from the ballot for next year’s event, he managed to secure a ‘golden bond’ place through the epilepsy charity, in return for a pledge to raise a minimum amount for it.

Patrick said: “It was quite a relief when I got the call to say the NSE wanted me. I was bitterly disappointed to have been turned down through the ballot so I tried my luck through a charity.”

He decided to run for the epilepsy charity because his sister was diagnosed with the condition at the age of 14 and he hopes to raise £2,500.

Patrick has completed the Great North Run three times as well as a marathon in Skegness, despite being advised to give up running after dislocating his left knee twice.

He added: “The second time I injured my knee my consultant told me to give up, but after expressing a desire to run the London Marathon just once he said my knees would cope – but to stop afterwards.”