A regional daily newspaper has produced a 12-page supplement to mark the 100th anniversary of a mining disaster that claimed the lives of 344 men and boys.

The Bolton News published the special pull-out to commemorate 100 years since the Pretoria Pit tragedy on 21 December 1910, which was Britain’s third worst mining tragedy.

The local community was shattered by the tragedy at the pit, near Westhoughton, and descendants of those who died travelled to the site from across the globe to pay their tributes. 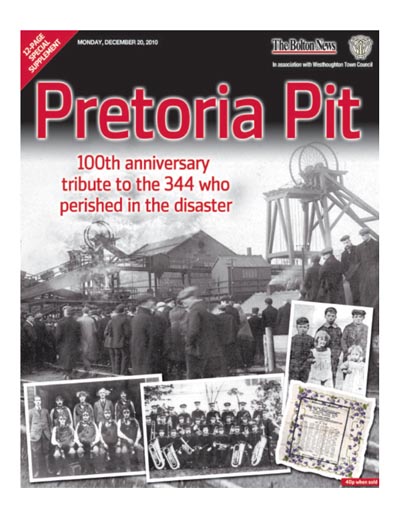 Editor-in-chief Ian Savage said: “It is important that the people of Westhoughton and surrounding communities never forget the sacrifice of men who worked in the toughest conditions imaginable.

“The loss of life was on a scale that is hard to fathom and scores of funerals took place on Christmas Day and Boxing Day of 1910.

“Considering the magnitude of the disaster, it is astonishing that more people – even locally – do not know very much about it. Some people in Bolton were not even aware of it.

“We hope our coverage goes some way towards redressing that.”

Those organising tribute events to mark the anniversary were consulted on the supplement, which was sponsored by Westhoughton Town Council.