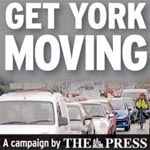 A regional daily newspaper has launched a campaign for government funding so a proposed transport scheme to tackle congestion in its city can go ahead.

York’s The Press started the ‘Get York Moving’ bid yesterday after the city council found out this week it must compete with 21 other transport projects for a chance of government cash.

The paper says the £25m Access York scheme to create three new Park and Ride sites is crucial to prevent the historic city centre becoming gridlocked by traffic and would attract investment into York.

Under its campaign, an online petition has been started for readers to sign, which will be presented to Transport Secretary Philip Hammond to try to win support.

An editorial in the paper yesterday said: “The project aims to create three new Park and Ride sites to prevent the city’s historic centre becoming choked by congestion.

“It would also provide swifter and greener transport links and inject vital cash into York’s economy by attracting businesses and investment.

“But its future now lies in the Department for Transport’s hands after a £23m grant expected by City of York Council was snatched away.

“Now the city must fight with 21 other projects for its share of a £600m pot. A decision may not be made until the end of next year, but the message that York deserves to be among the winners is being sent out now.”

York was overlooked in a government announcement earlier this week in which 16 road and bus improvement schemes were approved.

The three Park and Ride sites planned to be built on the edge of the city would replace existing facilities which are too small and the project also includes improvements to bus routes and a roundabout.