A regional daily newspaper has launched a campaign to save a local passport office from being closed with the loss of 300 jobs.

The South Wales Argus, based in Newport, has joined the fight to save the city’s passport office after the Home Office decided to consult on its closure.

And staff at the paper say they have been overwhelmed by support for their campaign, with a petition gaining 5,000 signatures of support so far in just a week.

A march has also been held in the city centre, which attracted more than 1,000 people unhappy about the possible closure of the passport office, many of them carrying South Wales Argus placards. 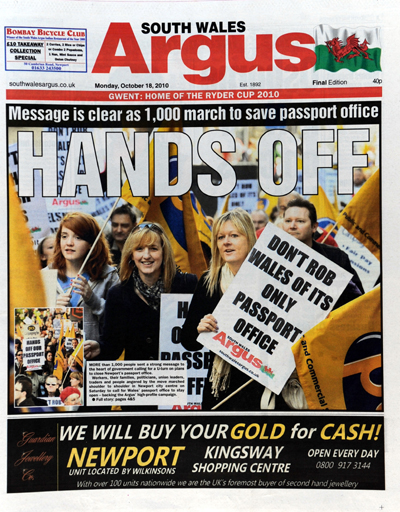 The Argus says if government cuts need to be made in the passport service, the cuts should be spread across all offices in the UK, not just one.

Editor Gerry Keighley said: “We understand the need for cuts across the board. But this is just using Wales as the fall guy.

“Let them close the London office and see how much they save doing that.”

The city centre march, held at the weekend, was led by an Argus van and staff from the paper attended to collect names on the petition.

Support for the campaign has been gained from politicians and business leaders such as Sir Terry Matthews, owner of the Celtic Manor Resort, which staged the Ryder Cup earlier this month.