A regional daily’s campaign to save a local passport office from closure has been taken to Downing Street after 24,000 people signed a petition.

The South Wales Argus launched the campaign last month after the Home Office decided to consult on the closure of Newport’s passport office, which would put 300 jobs at risk.

A petition was set up calling on Prime Minister David Cameron and Home Secretary Theresa May to step in and ensure the proposals were abandoned, gaining massive support from readers, politicians of all parties and even some celebrities.

And after gaining 24,000 signatures, reporter David Deans went to Downing Street to deliver the petition, along with Newport MPs Paul Flynn and Jessica Morden. 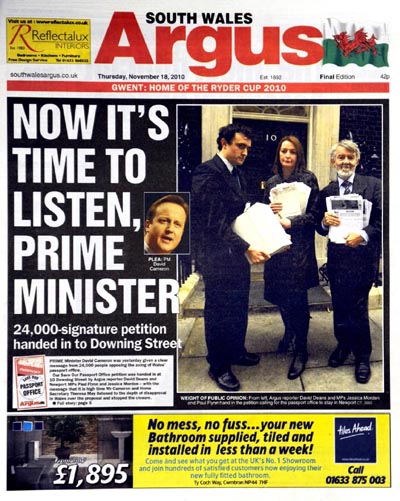 Editor Gerry Keighley said: “The figure shows the depth of feeling our readers have about the Identity and Passport Service plans which would see the loss of Wales’ passport office, in Newport, which currently employs 300 people.”

The Argus has also written to Mr Cameron calling on him to stop the closure and a march was held in Newport, which more than 1,000 people attended.

Ms Morden said: “It really shows the strength of feeling, and let’s hope they listen. Certainly we will keep putting the minister on the spot so they know how strongly people feel about it.”

The petition remains open and further forms will be sent on to Downing Street.