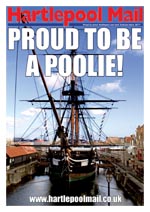 A regional daily newspaper has launched a campaign urging readers to show pride in their town in the wake of the ‘doom and gloom’ of spending cuts.

The Hartlepool Mail has started the ‘Proud To Be A Poolie’ drive and Tuesday’s edition of the paper included a free poster depicting the town’s well-known HMS Trincomalee with the slogan.

And it is calling on local people to take the poster with them on holiday and send in photos with it from destinations across the world as they tell people about their home town.

The campaign has received the backing of Hartlepool’s mayor and has already received support from as far afield as Perth, Australia, where a group of ex-pats have requested a poster.

Mail deputy editor Gavin Foster said: “Amongst the doom and gloom of the spending cuts, this campaign offers people in the community something to shout about.”

Hartlepool mayor Stuart Drummond was the first to back the campaign, saying it could boost tourism for the North East town.

He said: “It is at times like this, in times of recession, that the best businesses make the most of marketing opportunities.

“It’s the same with tourism. We are going to hit some extremely difficult times soon. Everyone needs to do their bit to remind the rest of the world that Hartlepool is still open for business.”

Earlier in the year, the title launched a similar ‘Come on Board’ campaign ahead of the town’s Tall Ships Races, encouraging readers to spread the word about the event by taking posters on holiday – which saw hundreds of pictures sent in.