Around 40 journalists from the Southern Daily Echo were out on strike today in protest over a continuing pay freeze.

Members of the National Union of Journalists from Newsquest Southampton started the first of two 48-hour strikes, with a protest outside a Press Complaints Commission open day being held in the city.

But Echo editor Ian Murray said the production of newspapers had not been affected by the strike action and the company was investing in jobs and new technology.

He said: “I’m very disappointed that some staff working at the paper felt the need to take industrial action but this has not affected the production of any of our newspapers.

“We have been working hard to ensure we invest in jobs here at our Southampton headquarters, and indeed have been interviewing to fill more posts this week.”

The union says they voted to go on strike after attempts to negotiate a pay settlement which had gone on since spring this year.

Members voted for the action after the company’s accounts showed one director received a pay rise of 21.5pc last year. 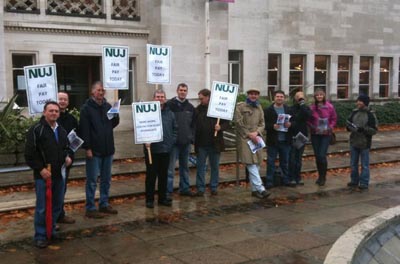 Web journalist Dan Kerins is one of those out on strike and has been giving updates on his Twitter account, where he posted the photo above.

He tweeted: “Newsquest made an £88.5m profit this year. Why shouldn’t I expect a cost-of-living payrise?

“I worked hard to get this career – and I enjoy it. I don’t see why I have a two year pay freeze while bosses get 21pc payrise!”

David Brine, an NUJ representative at the Echo, said around 40 journalists were on strike out of a total editorial workforce of between 60 and 65 people – with all NUJ members walking out.

He said he had handed leaflets out to people going in to the PCC’s open day and had received a positive response from them.

Said David: “We are proud of the paper and we don’t want to harm it. But we are trying to get a message over to our management to say they need to come back to the negotiation table with a realistic offer.”

The NUJ says the long-running pay freeze has amounted to a pay cut in real terms and it claims workers were asked to take a week’s unpaid leave last year.

Union members are next set to walk out on 16-17 November.