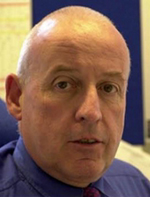 A new co-author has been chosen to write the next edition of journalists’ media law bible McNae’s Essential Law for Journalists.

Mike Dodd, left, has been approved by the Oxford University Press as the National Council for the Training of Journalists’ new co-author, who will work on the 21st edition of the book with Mark Hanna.

Mike, who has an extensive career in media law, is the Press Association’s legal advisor and editor of Media Lawyer magazine.

His co-author Mark, who chairs the NCTJ’s media law examinations board, wrote the last edition of McNae’s along with David Banks.

Mike said: “McNae’s Essential Law for Journalists was the textbook I studied when working for my NCTJ Proficiency Certificate all those years ago.

“It was much smaller and the law was simpler then – I prepared for the media law exam by virtually learning it by heart.

“These days that would be beyond any normal individual because of the huge growth in the amount of law affecting – restricting – the media.

“Working on the new edition alongside the excellent Mark Hanna will be a privilege, and I know that we shall both do our utmost to match the exemplary standards set by our predecessors.”

Mike has spent 43 years as a journalist, training with the Surrey Herald series then working in Fleet Street and in South Africa before joining PA, where he has worked for more than 30 years.

He qualified as a barrister and was called to the Bar at Middle Temple in July 2004, following a law degree at Thames Valley University and an MA in child and family law and policy from Brunel University – which were obtained while working full time for PA.

McNae’s was previously written by Tom Welsh and Walter Greenwood but it was announced at the launch of the 19th edition that it would be the last one by the pair.

David, who was co-author of the last edition and worked on two previous editions, said he had stepped down as he is involved in other projects including a media law consultancy and because of the impending arrival of his third child in the New Year.

He said: “Working on three editions of McNae, having used it as a trainee when I began my career in 1988, was an honour. I wish Mike and Mark all the very best with the 21st edition.”