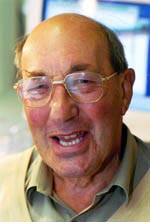 Tributes have been paid after a former group editor who led a weekly title for more than 30 years died while out walking his dog at the age of 87.

Frank Chapman held the post at the Kent and Sussex Courier and continued to write a popular weekly column, the Warwick Diary, on the history of Tonbridge and Tunbridge Wells, until his death.

He started out as a trainee reporter at the Tonbridge Free Press at the age of 15, spending time at the Press Association and London Evening Standard before joining the Courier as news editor.

Frank died last month while out walking his dog Nicky near his home in Shipbourne.

Courier editor Ian Read said: “Frank was one of a kind, and would still come into the office once a week to research his nostalgia page.

“He had an incredible knowledge of the local area and a remained a key part of the newsroom, many of the reporters looking to him for advice on particular stories. He will be greatly missed by all.”

Frank married his wife of 66 years, Joan, during the Second World War, when he trained as a pilot in Canada.

At the end of the war, he returned to work at his first paper before moving to the Press Association and Evening Standard for 12 years.

Frank decided to look for work elsewhere and turned down a promotion to deputy editor at the Standard and a position at Farmers Weekly to join the Courier, rising through the ranks to become group editor, when he was given a position on the board.

His wife Joan said: “He was always popular and worked very long hours. Very often the trainee reporters would come to him saying they had too much work.

“He’d tell them to leave it on his desk and, after they’d gone, he would do it himself. He was well-respected and his secretary always said he was loved by all the staff.”

Frank retired at the age of 65 but continued to produce his nostalgia column as well as writing a number of historical books about the area.