Former editor back in print with book double 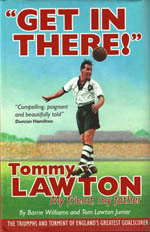 A renowned former regional editor has had two books published this month after gaining inspiration for them during his newspaper career.

Barrie Williams has written ‘Get in There’ telling the life story of football legend Tommy Lawton, who is renowned as one of England’s greatest goal-scorers.

And in the same month, he had also published a biography of his former boss Christopher Pole-Carew, the controversial former managing director of the Nottingham Evening Post.

Barrie was editor of the Nottingham title from 1982 to 1995, working under Pole-Carew for four years, and also edited the Kent Evening Post and the Western Morning News before retiring in 2005.

He was joined in writing the Lawton book by the footballer’s son, Tom Lawton junior, and it tells of his years of poverty, debt, drink, shame and scandal.

Barrie said: “The Tommy Lawton one is one I have wanted to write for a long, long time but never had the time as an editor to write a book.

“I met him in 1984 when I was editing the Nottingham Evening Post and life had treated him extremely badly.

“I decided to serialise his life story and at that stage the interest was purely journalistic. It was one of the most successful things I have published in 30 years as an editor for sales and interest.

“It also restored him to national attention. It completely restored his profile and reputation. I didn’t want to lose touch with him so I offered him a job as a football columnist.”

Barrie’s book on Pole-Carew, entitled ‘Somebody Had To Do It,’ tells how the managing director caused major controversy by sacking NEP journalists who joined a National Union of Journalists’ strike over pay and also how he introduced revolutionary new technology to the title in the 1970s.

He said: “The Pole-Carew book had a very different motivation in that anybody who knows him well knows that he was very badly misunderstood. 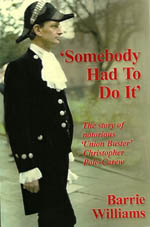 “His reputation is not deserved. Yes, he took a very strong stance against the unions but only when he felt it was stupid. He was never anti-union.

“Those of us who are journalists can see both sides of the story, I certainly can. It is a fascinating story because he was a huge figure in the regional press industry in the 1970s and 80s.”

Barrie’s own autobiography ‘Ink in the Blood’ was published in 2007.