Editors ‘could be prosecuted’ for publishing sex ads

Newspapers which publish sex adverts could face prosecution by the Metropolitan Police, it was claimed today.

As part of an exclusive investigation into sex trafficking, the Croydon Guardian reports a senior police officer saying editors who continue to run adverts for brothels could be arrested.

Vice squad detective inspector Kevin Hyland told the paper: “It is an offence to advertise for prostitution. If newspapers do run adverts there is a possibility of prosecution.

“The legislation we are thinking of using is aiding and abetting offences of controlling prostitution for gain, offences of trafficking under the Sexual Offences Act 2003 and possibly money laundering.” 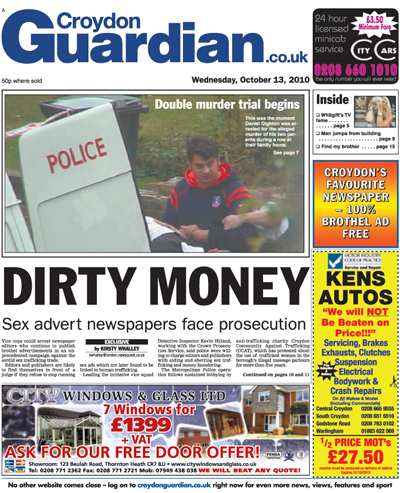 He said: “Kirsty was contacted by a woman who had been beaten, raped and tortured after getting trafficked across to the UK on the false promise of a job.

“She had read earlier stories Kirsty had written about sex trafficking in Croydon and wanted contact details of someone who could help. Kirsty befriended the woman and over a series of emails gained her trust.

“DI Kevin Hyland of the Met’s vice unit took up the woman’s case and Kirsty followed this up with a series of meetings about his initiatives to tackle sex trafficking, as he was thrilled about the position our newspaper group had taken over the sex ads issue.

“Kirsty worked closely with DI Hyland to prepare this week’s story which has involved long and sometimes fraught negotiations to get to this stage.”

In the Guardian’s article, it claims sex adverts were estimated to be worth more than £44m for the regional press in 2006.

A spokeswoman for the Metropolitan Police Service said its Human Exploitation and Organised Crime Command was a specialist unit tackling trafficking and prostitution and a number of people had been jailed in recent months.

She said: “In many of these investigations, the organised criminal networks have sought to advertise through local newspapers or advertising journals.

“It is important that everyone plays their part in trying to reduce the opportunity of criminal networks to continue their illegal activities and their exploitation of vulnerable people through advertising sexual services. The MPS is working with the media to tackle this.”

The weekly newspaper is owned by Newsquest which took a decision in 2008 to ban sex adverts but rival Northcliffe title the Croydon Advertiser has been criticised for continuing to run the adverts.

In August the Advertiser faced calls by Croydon Community Against Trafficking for readers to boycott it in August, after it ran a story exposing a brothel, while at the same time allegedly carrying adverts for the same establishment.

Its editor-in-chief Alan Geere has yet to respond to requests for a comment on the Guardian’s report.

Former regional editor Steve Dyson, who called for a ban on sex ads this summer, said: “This is exactly why the regional newspaper industry needs to be so careful about the sexually explicit services it potentially offers via its classified sections.

“What has been seen in Croydon is surely a reminder to all in our industry that now is the time to ban sex ads.”