Dyson at Large: The dangers of central subbing hubs

It was the wayward imprint next to the barcode on the back page that alerted me.

‘The Burnley Express is published by East Lancashire Newspapers at Bull Street, Burnley…’ it read.

Hold on a minute, I’m supposed to be reading the Nelson Leader operating from Scotland Road, Nelson, I thought, what’s that got to do with the Burnley Express?

It was an edition-change error somewhere in the production process, of course, but such a fundamental one. 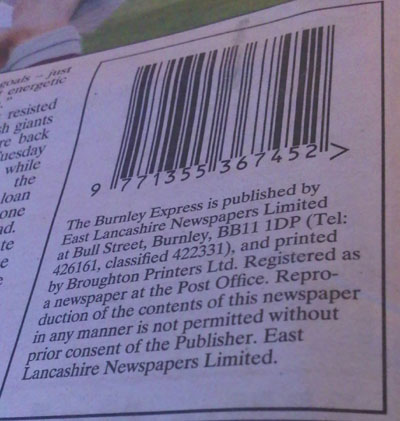 We all know that group editors and multi-title subbing hubs have rightly or wrongly become the norm for weekly newspapers, as companies strive to preserve profit margins.

But I fear that local identities are being further swallowed up as some papers amalgamate pages across different titles as well to cut editorial and production costs.

Roy Prenton is the editor of the Nelson Leader, but you can hardly blame him for the complex nature of titles, editions and page flows that are channelled through a subbing hub 21 miles away.

For a start, he also edits the neighbouring Colne Times and Barnoldswick & Earby Times, the titles already sharing pages like the letters and comment spread where readers are carefully asked to write to ‘Leader Times Newspapers’, the collective name for all three.

The Clitheroe Advertiser is a separate but sister title also edited by Prenton, and all four of his papers’ pages are created and subbed together at Johnston Press’ central production hub in Preston.

The Burnley Express is another sister title, this time with its own editor. But its pages are also laid out and processed at Preston, and it appears to share various sports pages with the Nelson Leader because of readers’ interest in the ‘Clarets’ football team.

This, I’d wager, is where the page-change error crept in, the Leader’s back page lead taken from the Express but without switching that all-important bar code panel.

A small blunder, you might think, but potentially quite a costly one when circulation revenues and ABC audits are considered.

The dilution of brands happened again on page 68 of the Leader, the 2cm strapline in white out of blue reading ‘SPORT: for latest local sports news go to www.burnleyexpress.net’ rather than the ‘www.pendletoday.co.uk’ address used on all other sports pages.

Even this umbrella website points to brand dilution, the hyperlocal Nelson, Colne and Barnoldswick & Earby newspapers strangely regionalised by the wider Pendle name.

Barcodes and brands aside, there was good enough local content in the Nelson Leader’s 3 September edition.

The ‘Schools hit by £60,000 thefts’ splash and the ‘A hero returns’ write-off were both worthy of the front page. 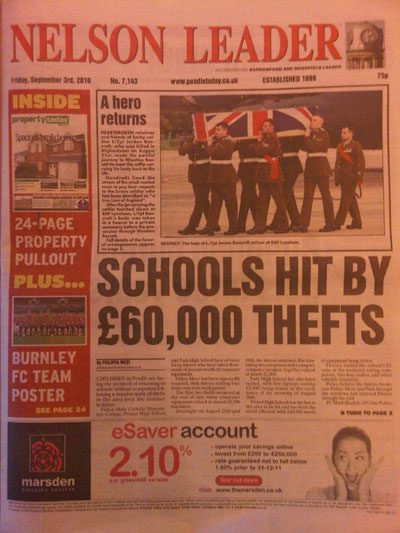 Inside, ‘Bungling burglar gets three years’ on page two, ‘Toxic algae poses a harm to the public’ on page three and the local Battle of Britain featurette ‘Salute to one of The Few’ on page nine were also decent reads.

‘Terrier’s trauma during visit to the vets’ was the headline that grabbed me on page 22, the poor dog having been left in the supposed safety of a vet’s surgery.

If the old “dog bites a man” rule of news is applied, one mutt getting nipped by another would usually be a definite candidate for the spike.

But with cute little Ruby staring out at you from the paper, and a second picture showing huge jaw marks after a Rottweiler ten times her size sank his teeth into her, I softened.

Painful, I’m sure, and distressing for the elderly owners concerned, all making a heartstring-tugging story for animal-loving readers.

I thought the cover price a little steep at 75p for a Leader that contained just 80-odd stories in a 72-page book, including a 24-page ‘propertytoday’ section. That said, I liked the added value of the Burnley FC team picture as a centre spread ‘poster’ pull-out.

My residing thought, however, is that Johnston Press – and others with group editor, central subbing and ‘clever’ CMS operations – must take more care and retain enough resource to eliminate costly and brand-diluting production errors.

According to the Latest ABCs, the Nelson Leader (Series) sells 13,030 a week, down 7pc year-on-year.