I thought I was in for a stonking read when I handed over 45p for the Evening Times in Glasgow just before boarding the train home to Birmingham. 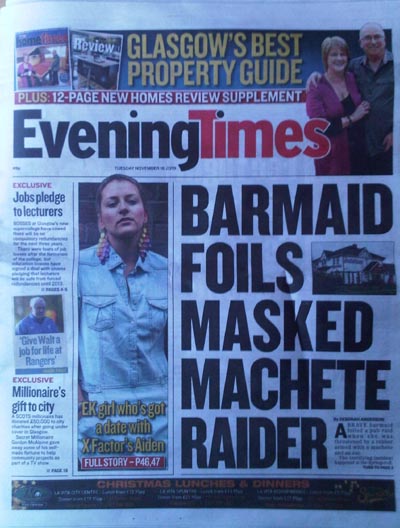 What a shame, then, that all three main elements of page one disappointed me as a reader, creating a bad start which had me finding all sorts of other let-downs.

Let’s start with the splash: despite the dramatic headline and intro – the masked raider apparently had an axe as well as a machete – nothing that “terrifying” really occurred.

When confronted, the unnamed barmaid simply ran towards customers, causing the short-arsed raider (only 5ft 3in to 5ft 5in according to the description) to scarper.

A bit scary? Yeah, maybe, but in Glasgow of all places surely this scanty, 11-par tale would have been better as a down-page kicker on an early right-hander, not a page one screamer.

Next the X Factor picture tease: turning to the full story on pages 46 and 47, this was no kiss-and-tell celeb story from Aiden Grimshaw’s love life, but simply a local support singer booked for a forthcoming show. Yawn.

As to the boost for Glasgow’s ‘best’ property guide, it was actually the weakest homes pull-out I’ve seen in many a month, with a single ‘Buy of the Week’ picture feature stretched across three pages to fill space.

If it was technically the ‘best’, I’d hate to see the ‘worst’, given that there were only a total of around 110 individual properties advertised in the entire 20-page pull-out.

There are thin news days faced by all papers, of course, but to my mind the three write-offs carried down the left hand column of page one on Tuesday 16 November would each have provided more substantive front page leads.

Two were ‘exclusives’, the first dominating a spread on pages four and five reporting a three-year ‘no redundancies’ pledge for up to 2,000 staff at Glasgow’s new super-college – pretty astonishing for a public sector institution in 2010.

The other was a nice human-interest report on a local entrepreneur giving away £50,000 to charities on TV’s Secret Millionaire, with pictures available for the story told in full on page 18.

Even the third write-off – ‘Give Walt a job for life at Rangers’ – would have made a better splash in a city devoted to football.

That’s my opinion anyway, and one that I reckon would have been shared by readers who don’t like getting hood-winked by over-spun headlines.

Thus disgruntled, I was then sniffy at the Evening Times’ page two lead headlined: ‘Fee flight will hurt Scottish students’.

“Never mind them in their devolved daydream,” I thought aloud, “they’ve still got fee-free education as opposed to threats of £9,000 a year in England!”

Cue a couple of raised eyebrows from Scots in my packed carriage.

As for page three, the ‘Hollywood star turn for Christina’ lead on pop diva Aguilera’s latest US publicity boost and the ‘Celebrity Gill’s jungle ordeal’s not yet over’ kicker on nutritionist McKeith’s jungle challenges were thumbed past without stopping.

I was similarly unimpressed with the spread on pages six and seven, a huge slot given over to a £250,000 makeover for a local nightspot under a ‘SAVOY’S STAYIN’ ALIVE!’ headline, prompting another quick page-turn.

Two other front-end spreads had me thinking that the Times’ newsroom was simply pouring in filler material.

‘FESTIVE FUN A FAIR BIT OF WORK FOR MARGARET’ took up most of pages 16 and 17, a pretty anodyne backgrounder on Glasgow’s Irn-Bru Carnival opening on Christmas Eve.

And ‘GOLDEN MOMENTS’ in an arch-shaped banner across a spread of seven average Autumn pictures on pages 20 and 21 had even less impact.

In fairness, there was useful enough content on some of the other pages, but even these stories quite often appeared under lengthy, lack-lustre headings.

Try this flaccid headline across two decks from a page lead on page 19: ‘New drive aims to put the brakes on counterfeiters’, (the story having nothing to do with anything on wheels, by the way).

The numerous spreads (eight) resulted in a mediocre story count for the Newsquest title: about 130 reads on 28-pages of news and features in a 48-page main book, plus a spread of TV listings and a puzzles page.

Sport had 11 pages but at first count only 37 stories – although there was a page of race cards and another of league tables, along with a panel of 29 nibs of player appeals from local sports teams on the latter.

After impressive reads from Dundee and Hamilton in recent weeks, I crossed the border feeling Scotland had been a little let down by this edition of the Evening Times.