It was spotting what should have been the splash on page five of the Saffron Walden Weekly News that gave the game away.

‘Council gives store plans thumbs down’ ran the headline, the report telling how the town council had rejected a new Sainsbury’s supermarket after fears it could cause “irreversible damage” to the historic market town.

This was huge news in a town of 16,000, beating anything else in the News’ 23 September edition, including the ‘Calls for cash to keep day centres’ that led page one. 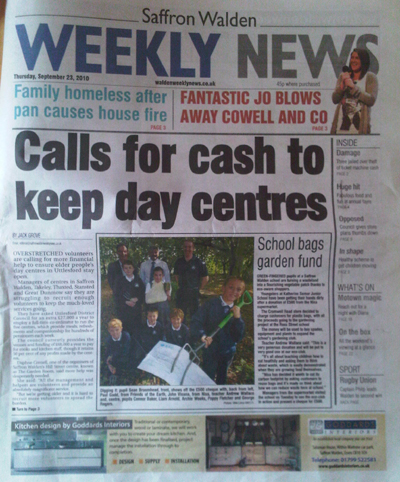 But I understood exactly what was behind the placement decision when I read page five of the competing Saffron Walden Reporterr of the same date.

‘Store stands firm’ was its headline, reporting store bosses’ angry response to the rejection, with a reference to how “the Reporter revealed last week that town councillors supported a motion to veto Sainsbury’s”.

Yes, the Reporter has splashed on the rejection the previous week, the headline ‘Town votes to block the superstores’ appearing on page one of its 16 September edition.

The crucial town council meeting had been on Tuesday 14 September and by publishing this two days later the Reporter had clearly beaten the News to the story of the week, the latter not even uploading its version until 24 September.

Had the News simply missed the story? Or are deadlines just later at the Reporter?

I’m not sure, but what is clear is that Saffron Walden residents were better served by the Reporter’s follow up on 23 September.

And the Reporter’s page one splash of that date was a better read as well, its potential bin collection cuts of wider public interest than the News’ above-mentioned day centre cash calls in my book. 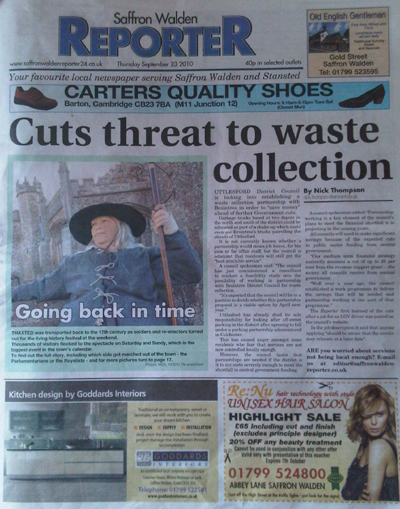 I felt the same looking at page three of both titles: the News’ nine-par lead was a chip pan fire that made an unnamed family made homeless; the Reporter placed this down-page in seven pars, instead leading with a detailed 16-pars about major delays for a planned new junior school, another story missing from the News.