A West Country weekly has been praised as a ‘wonderful paper’ by the Duchess of Cornwall as she attended a special reception for its 250th anniversary.

Camilla, who has a home in Wiltshire, revealed she had been a reader of the Bath Chronicle for many years when she met editor Sam Holliday and managing director Sarah Irvine.

She was in Bath to switch on the city’s Christmas lights and after performing the ceremony, she attended a special VIP reception organised by the title.

The reception featured 150 guests from Bath and was part of the paper’s 250th anniversary celebrations, which have also seen Bath Abbey ring its bells for 30 minutes for the milestone. 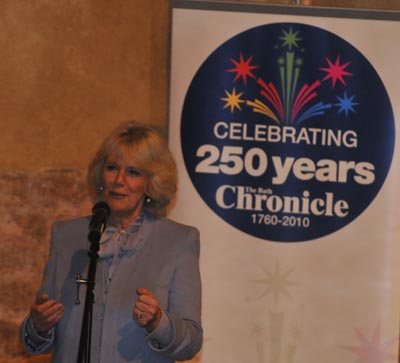 The Duchess said: “I have been a reader of the Bath Chronicle over many years – it is a wonderful paper.

“I regard Bath as my city and I think the Chronicle does a very good job as do all our local newspapers which are so important to our country.”

Sam said the light switch on and reception had been a night to remember.

He said: “I thought the Duchess was lovely and everyone who met her was very impressed with how down to earth and approachable she was.

“I was obviously delighted when she said how much she liked the Chronicle and our city as a whole.

“And it is always good to see that the role of local newspapers is appreciated by those with power and influence.”